Earlier this month, AGE Africa Executive Director, Concepcion Gaxiola, sat down for an interview with His Excellency Ambassador Edward Yakobe Sawerengera of the Republic of Malawi to the United States. In their conversation, Concepcion and Ambassador Sawerengera discussed the importance and benefit of girls’ education in Malawi, and talked about some factors motivating girls to walk such long distances to school. Concepcion even got the low-down on what motivates the Ambassador to be so engaged with and participate in AGE Africa race events, like the upcoming 10K A Day. Read the interview below for details on their conversation!

The following interview has been edited and condensed for content and clarity.

Concepcion Gaxiola: Ambassador Sawerengera, I appreciate you taking time out of your schedule this afternoon to speak with me about your commitment to girl’s education, Malawi – the warm heart of Africa, and your participation in AGE Africa’s 10K A Day. I think it is important to capture the spirit of the 10K A Day by highlighting your commitment to AGE Africa and the girls in Malawi, so I’m going to go ahead and begin!

CG: Recent reports from the World Bank and other independent agencies highlight the correlation between girls’ education and a country’s economic standing. Why is girls’ education important for the economic future of Malawi and how will an educated workforce support future generations?

Ambassador Sawerengera: Thank you Concepcion for stopping by and for the work AGE Africa does to help girls in Malawi. Girls education in Malawi is very critical. Women make up more than 50% of the population in Malawi. Most households are in the rural areas of Malawi where close to 85% or 90% of the population lives. [I]t is the women who take care of the children, the family, even the parents of both sides. 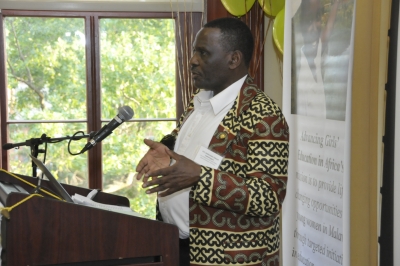 The Ambassador has been a supporter of AGE Africa since he started his tour of duty in the United States in 2016.

Unless girls and women are educated, life will not improve in Malawi. Women will not be able to improve their quality of life, the lives of her children, her relations [family], and also the society. Educating girls is not debatable, it is a must to achieve great economic improvement of our society, it is imperative that our girls be exposed to an education.

CG: As you know, this is our second year of the 10K A Day, which honors girls in Malawi who walk an average distance of 10 kilometers, one way to go to school. We recently supported a young lady by the name of Falesi who attends Chambe Secondary School in Mulanje. Prior to AGE Africa’s support, she walked thirty kilometers in a given day just to get to school. What do you think motivates girls, like Falesi, to walk such a long distance to be able to go to school?

AS: Girls in Malawi are beginning to realize that in order to have a bright future they need to be educated. This generation of girls have seen or know women who have graduated from secondary school and university. Malawi has female teachers, female Members of Parliament, nurses, doctors, and professionals in other areas once dominated by men. Most recently, Malawi Defense Forces began to recruit women and have commissioned female officers.

These role models are what motivates girls like Falesi to walk incredible distances five days a week. They see women who are independent, successful, and able to feed their families and take care of their communities. They [girls] know that unless they attend and complete school, they cannot dream for a bright future. 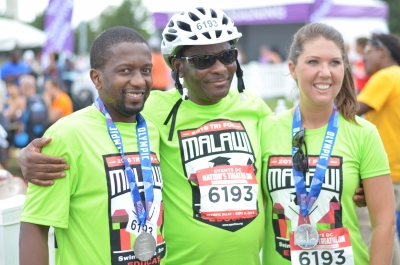 CG: Why else do you think it is important to share the stories of girls like Falesi who will walk incredible distances?

AS: Although Malawi provides support to girls in primary school, government resources in Malawi are limited. The donor community has been essential in providing additional support when the government is unable to provide. Sharing stories like that of Falesi, is important not only to inform supporters but to inform the girls themselves. When the girls hear stories like Falesi and the sacrifice she makes to attend school, other girls are encouraged to push on and finish secondary school and in some cases enter university or start small businesses.

AGE Africa’s founding began with the sharing of a story. Xanthe Scharff, traveled to Malawi for an internship in Bowa Village outside of Lilongwe, the capital of Malawi, and met a family struggling to pay fees for their daughter to attend school. After coming back to the United States, Xanthe wrote an article in a U.S. publication, people here were touched [by the story] and moved to support the girls in Bowa Village. What started as a story for one, became a movement to support six or seven girls, and has now turned into AGE Africa, an organization that supports over 2,500 girls, pushing forth to change the life of a girl and a nation.

CG: Why are you passionate about girls’ education?

AS: Before I came to the United States to serve as Ambassador, I knew there were institutions and nongovernmental organizations that were supporting education in Malawi, especially those targeting girls education, but I was not aware of AGE Africa.

When I arrived in the U.S. and learned of AGE Africa, I attended an AGE Africa dinner event for the Tri for Malawi. I was taken aback by the people at the event, all of whom were energetic and excited to support girls’ education in Malawi. I felt that if these people were willing to swim, bike, and run to send girls to school, then I needed to be part of the movement. 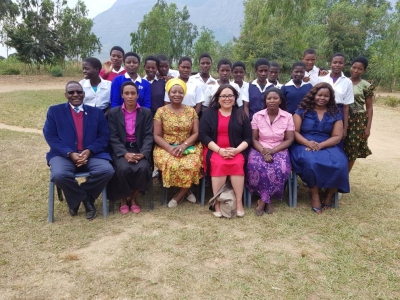 The Ambassador supports AGE Africa in Malawi as well. Here he visited one of our partner schools in Mulanje District, Malawi.

I am a father of daughters, grandfather of granddaughters and an uncle to many nieces. My work with AGE Africa helped me look within my own family and personally support those who are failing to go to school because they lack the resources, but have the drive and passion to pursue an education.

In addition to supporting family, I made a pledge to myself that I will participate in all AGE Africa activities. I’m touched by the commitment and support of the AGE Africa team and the many supporters who give to people in Malawi. When I am in Malawi I knock on doors of people I know and ask them to support AGE Africa. After I finish my post in the United States and as long as I have access to resources I will continue to support AGE Africa – I will not stop. You don’t know how much you are helping our sisters, daughters, and mothers in Malawi.

CG: We are so thankful for your commitment and support of AGE Africa. That’s why we put these events together, we want people to see that it’s not about us, it’s really about the girls that we want to support. Your voice and the other voices here at the Embassy, and supporters back in Malawi really makes such a difference. I think it’s an effort of everyone and not just an individual, so thank you for being part of that effort.

AS: I’ll be there every day.

If girls are educated, they become knowledgeable. They are an informed group of people. They are even ready to make choices for their lives and they are prepared to decide how many children they want to have. In addition, they [women] will be able to contribute to the social and economic development of Malawi. Educated people are productive because they are knowledgeable, informed, and open-minded. The goal of poverty reduction will be achieved because an educated society is a productive society. 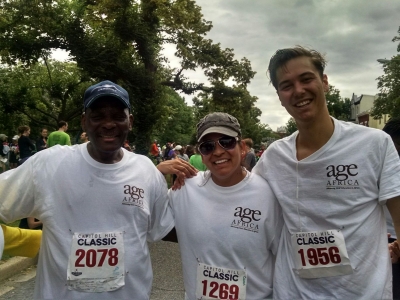 The Ambassador with some of our runners at the Inaugural 10K A Day in 2017!

Once Malawi has a productive society, a literate group of people, then we’ll be on the path of productivity. As I mentioned earlier, most of the farming activities in Malawi, 75%, are undertaken by female-headed households. Once girls are better educated, women can improve the methods, the systems of agriculture, and business. The women will be the change that moves Malawi up the economic ladder.

CG: For folks who aren’t able to join us for the 10K A Day, we are asking them to be a part of 10K A Day by challenging themselves between now and May 20th to do their own 10K in their neighborhood or through an activity for work, to also take part in this event even if they can’t come to Washington, DC. What words of encouragement or motivation or appreciation would you like to share or let the team in DC and individuals who are going to take part in this virtual race know?

AS: Let me just say that I really appreciate what AGE Africa supporters have achieved in the last 13 years. The outpouring of support has given girls in Malawi opportunities that would not be possible had it not been for the generosity of the American people. I want to fully express my personal gratitude and that of the government of Malawi, and I pray to God that God continues to bless our supporters so they may continue to bless other people.

We have seen many girls with no hope to complete their education. Or those who did not even think of going to school have money to complete school and, currently, they are actually realizing their dreams. They are hopeful of a bright future because of the support.

To those on the 10K A Day team, those who have actually made the decision to be part of the team this year, I want to welcome them and thank them for their commitment to our girls in Malawi. Their participation in this year’s 10K A Day will see many women continuing their education.

AGE Africa’s intentions, vision, mission, is to cover [and support girls throughout] Malawi. So, I would ask those who continue to be spectators to start thinking seriously about getting involved. It is only through involvement that things will happen. Clapping hands is very good, cheering is very good, but I think that it will make a significant difference if you get involved and you are part of the progress. If they cannot join us on the 10K run, there are so many other ways they can join us. So, I would like to encourage those people who are able to join us. 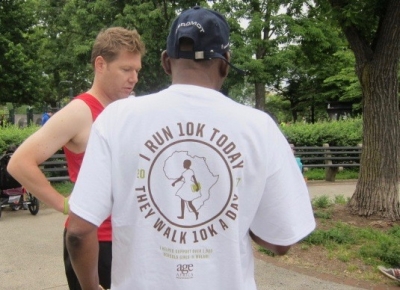 CG:  Thank you, Ambassador Sawerengera for your time. It’s truly an honor to have you on the team. Your support is valuable to our work but most importantly to the girls we serve in Malawi.

AS:  You’re most welcome, Concepcion. We appreciate what AGE Africa does for the girls in Malawi.

To echo the Ambassador, JOIN US! The upcoming 10K A Day is a great way to start supporting AGE Africa’s efforts. There’s still time to sign up for the race, donate to one of our runners, or participate virtually.  Be sure to let us know how you’re getting involved by using the hashtags #RunforHer and #10KADay and following us on Facebook, Twitter, and Instagram.